Indoor airborne transmission largely depends on air distribution and ventilation. This study experimentally and numerically investigates steady-state aerosol transmission characteristics in a full-size room using a dedicated outdoor air system coupled with ceiling fans. Tracer gas was used to simulate the exhaled droplet nuclei from the infector, and a breathing thermal manikin was employed as a seated exposed person. Effects of air supply rates, ceiling fan speeds, source positions, and breathing modes of the exposed person on the aerosol transmission were studied. The increase of air change per hour from 4.5 to 5.6 and 7.5 reduced the averaged concentrations at sampling points by 18% and 38%, respectively. The ceiling fans generated local air movement and mixed air within the space, and a higher operating speed contributed to a more uniform concentration distribution. With better dispersion of the aerosols, the ceiling fan operation reduced the concentrations at the exposed person’s breathing zone by more than 20%. The ceiling fans show the potential to reduce the cross-infection risk in an air-conditioned space. 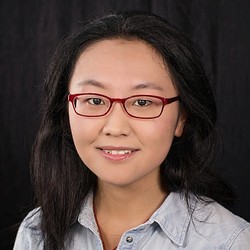